I recently joined a group of birders with my shiny new Leupold binoculars in-hand to canvas an area of Sutter County as part of Audubon’s Annual Christmas Bird Count. Thanks to stewardship of Ed Pandolfino, the Count Compiler, and his team of volunteers this annual Lincoln Bird Count just finished its 16th count!

Photo by Ed Harper of the Pacific Golden-Plover on December 28 in Placer County.

The big news this year was the first ever, documented sighting of a Pacific Golden-Plover in Placer County. “This is a fairly rare bird in California as they should be in Hawaii or other Pacific Islands for the winter,” remarked Pandolfino. Ed went back to the site the following day and the bird was still in the same field. “Clearly it’s finding the rice field an excellent source for nourishment,” Ed noted, “Hopefully the field is providing enough sustenance to allow this bird to return to the arctic breeding grounds next spring.”

Each year, both experienced and novice birders alike arrive very early and break-out into very specific routes to observe and count birds pretty much exactly the same way each year. These Christmas Bird Counts occur all throughout the country. In all, there are approximately 2,000 of these 15-mile diameter Count Circles across North America and some go as far back to the very beginning of the Christmas Bird Count in 1900.

This year’s Lincoln Count experienced mild temperatures and mostly clear skies for the 97 folks who participated. The Count is conducted within a 15-mile diameter circle encompassing nearly 180-square miles. It’s centered just southwest of the city of Lincoln, includes large expanses of open grassland, flooded rice, valley oak riparian corridors, and urbanized areas of Lincoln, Rocklin, and Roseville. It’s mostly within Placer County, but takes in the southeastern corner of Sutter as well.

A total of 137 bird species were found this year and hundreds of thousands of individuals were tallied including many thousands of Snow and Greater White-fronted Geese among 24 species of waterfowl. As usual for this count, we found a good variety of raptors including Bald Eagles and four different species of falcon.

I had a great time joining the group at the evening pizza gathering where they compile and report out their results. It’s a great community gathering with a lot of excitement about birds. Ed is really good at encouraging anyone to participate regardless of previous birding experience. If you are interested in joining the effort next year, please shoot Ed Pandolfino a note at ERPfromCA@aol.com.

Paul Buttner is Manager of Environmental Affairs for the California Rice Commission. 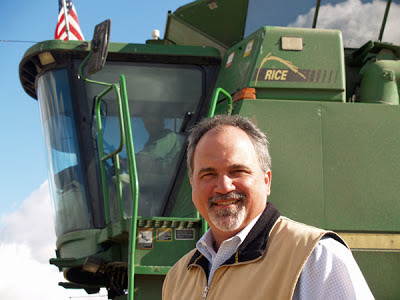